In March this year (2018) I bought a 3D printer: Wanhao Duplicator i3. The idea was to test the possibility of printing a 3D model of the reconstruction of the original form of the Roman Theater in Volterra. The model would be based on my research of the theater and other structures of the same type which I have pursued since 2008. The study has resulted in amazing discoveries which are awaiting to be published in professional journals (hopefully soon) and which I am hoping to describe in great detail in a book. The working title of the book is “Confronting Vitruvius: Geometry, Form and Function of Roman Theaters.”

I run the first 3D printing tests on maybe the most challenging parts of the design: the Corinthian columns. The results were amazing: the details on the columns looked crisp, the overall quality of the printed elements was very high. So, this is how it started. And this is where the project is today (June 18 2018): 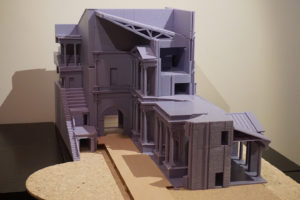 The first subject which needs to be clarified is the mater of scale: it is 1:72.

Why this seemingly awkward scale? Why not something more typical for the metric system (such as 1:50 or 1:100), or one of the architectural scales used in US: 1″=4′ (which is the same as 1:48) or 1″=8′ (which equals 1:96).
For starters, the 1:72 scale is a good in-between scale. The first 3D prints showed that 1:100 (or 1″=8′) was too small, and 1:50 (or 1″=4′) was way too large. The 1:72 scale is identical to 1″=6′, so it is exactly in the middle between the two standard architectural scales. But it is also very familiar to modelers: a lot of models and figures are manufactured in this scale. There is an actual entry in Wikipedia on the subject of the 1:72 scale. It states, among other things, that “(…) This scale originated with the Skybirds and Frog Penguin aircraft model ranges produced in the United Kingdom during the 1930s and was subsequently used for aircraft recognition models by the Allies of World War II. More subjects and genres are covered in this scale than any other. Widespread in Western and Eastern Europe, Japan and Latin America, the scale is extremely popular in the UK but less so in Australia, Canada, and the USA, where 1:48 is more prevalent.” (Wikipedia: 1:72 scale)

A quick check showed that there are in fact figurines of not only Roman legionaries, but also civilians available in this scale. So, the 1:72 option offered workable and manageable model dimensions, but I could also obtain scale human figurines to visualize the size of the original structure: 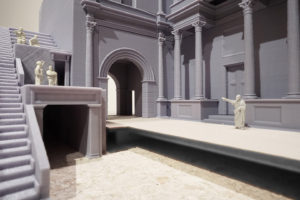 The image above doesn’t illustrate the actual size of the model, so to communicate it better, I took picture of the central part of the model with one of the essential tools used in the process: the x-acto knife: 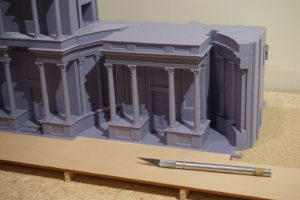 The overall dimensions of the model will be (when finished) 93 cm X 52 cm (c. 36″x20″). The intention is not to model the entire auditorium (cavea) of the theater, but only the scaenae building (detailed explanation why will come – eventually).
It is clear, that a model of this size can’t be printed in one piece (at least on the desktop 3D printer). The most important part of the process was therefore to divide the form into printable and interlocking pieces, which could be printed individually, and then assembled into the final model. Well, this part of the process took a lot of imagination and learning…

For example, the image on the left below shows a central portion of the porticus post scaenam (the porch behind the stage building) after assembly. On the right just the colonnade with individual parts shown in different colors. Each part was 3D printed separately (the computer model doesn’t show the capitals, which are all the same).

Just the roof above the cornices, with the wall behind, is made of 13 individual parts, as illustrated below. The colonnade of the porticus at the top of the image was made from another 20 parts (10 of which were the ionic capitals of the columns and half-columns). 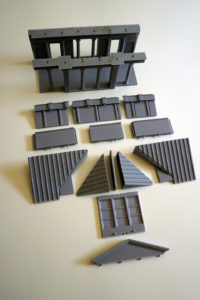 This is how the above segment of the porticus post scaenam fits with the rest of the model now. Together with the other parts of the colonnade it can be moved to reveal the inside of the building. 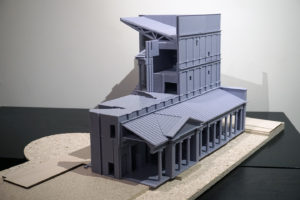 And the advantage of having the human scale figures is evident: 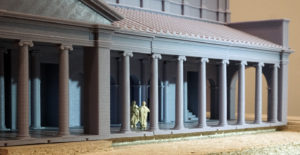