Research articles published on the design principles and the geometric framework of Roman theaters.

I am very pleased to announce that my two-part article titled “The Geometric Language of Roman Theater Design” has been just published by the Nexus Network Journal: Architecture and Mathematics.
My adventure with Roman theaters, their history and design, started with the Roman theater in Volterra. And the ability to work with the 3D laser scan of the theater site was one of the most important factors in my study. The precision of the measurements and unlimited access to information made this entire research possible. 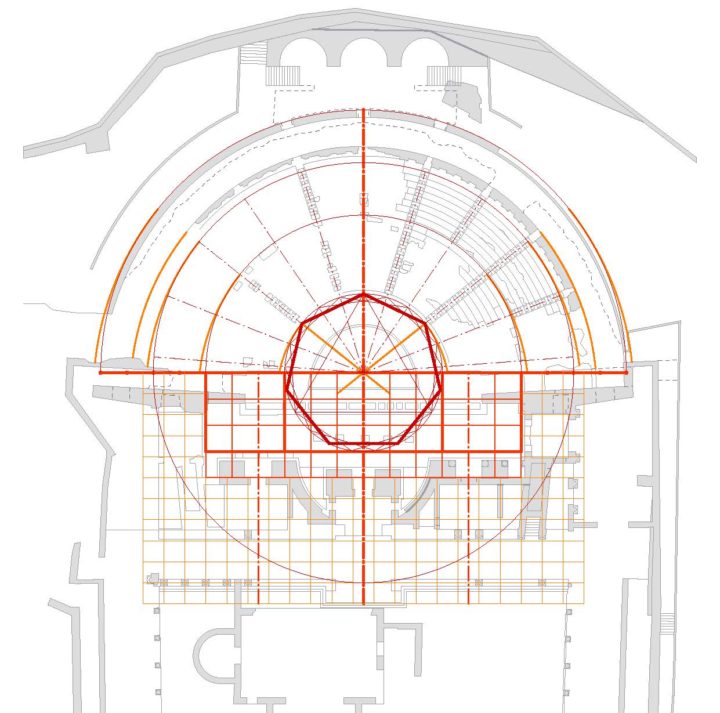 The articles can be downloaded from the Nexus Network website:

Abstract:
The two-part article presents a new theory of the geometric methods used by architects to plan Roman theaters. The study is based on a systematic geometric analysis of the archaeological evidence. It showed that the designers did not follow Vitruvian guidelines, but rather a much more complex and flexible geometric system.
The first part of the article covers the geometry of the cavea. The second part will present the analysis of the scaenae building and the geometric methods Roman architects could use to plan the size of the theater for the expected capacity of the auditorium.
The article will demonstrate that the layout of the cunei in the cavea was designed based on central angles specific to a variety of regular polygons, including those which are geometrically non-constructible, like heptagon or nonagon. The plan of the scaenae was based on a square grid coordinated with the proportional system of the whole project including the location of the axes of the valvae hospitalia. The capacity of the theater was calculated based on the geometric approximation of the value of π.
The plasticity of thus defined geometric design methodology, and its various parameters, resonates much better with our knowledge of the ancient theater structures: they are all similar, but each one is unique. The research offers also a new insight into the Roman design practices.

Abstract:
The first part of the article discussed the geometric framework of the cavea in Roman theaters. The second part presents the results of the investigation of the geometry of the scaenae building and the methods of planning the size of the structure based on the expected number of spectators.