The term “Reality Capture” has a very specific meaning within the AEC community. Basically it entails using digital tools to automate the process of surveying buildings. In effect these tools are substitutes for the time-honoured tradition of making measured drawings.

In April I joined a Reality Capture workshop in Volterra, Tuscany. My intentions were twofold. Firstly I wanted to learn about these technologies, to acquire new skills. Secondly I was looking to better understand the history of this region of Italy where the Renaissance began. We could call this a search for wisdom.

There is a dichotomy here that has fascinated artists and craftsmen for centuries. You have to strive to perfect your technique, but virtuosity does not guarantee depth of insight. So as artists, we are always striving to balance our development along the twin axes of skill and wisdom, technique and insight, form and content. 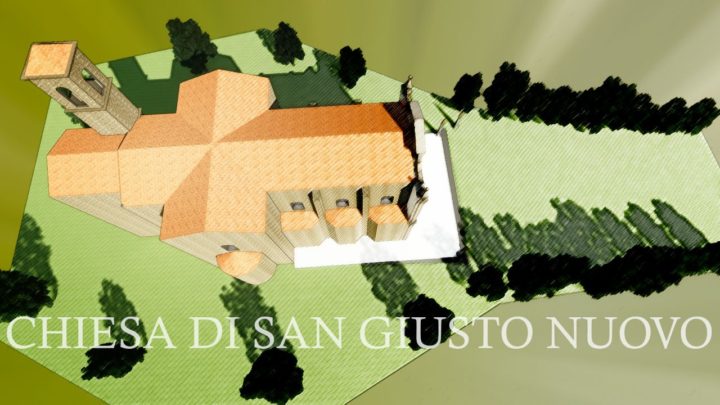 My first experience of laser scanning was at a location outside the medieval city wall, but inside the boundaries of the old Etruscan city. I’m fascinated by this “inside-outside” duality. The city wall is a key element in defining the identity of Volterra and yet you can live outside the wall and still belong. There is an analogy here to how we approached the scanning of the church. We had two sets of data, one for inside and one for outside. It was crucial to link the two groups of scans by a dataset taken at the threshold. I think there is also a duality in the design o the church. The exterior of the church is different in feeling from the interior. The outer shell is coarse and rustic, an irregular mix of brick and stone, bearing the marks of time. Inside we have smooth surfaces, rich colours, delicate mouldings. So we have duality in terms of scanning technique and duality in terms of architectural expression. 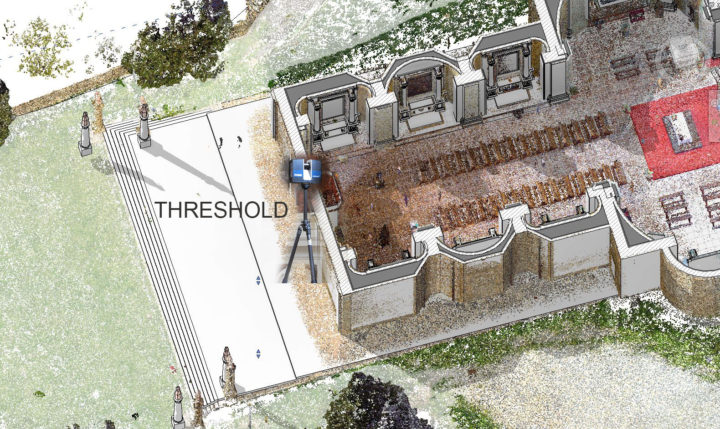 This contrast between external form and internal volume is very common in church architecture. Perhaps we could compare the linking dataset taken in the church doorway to the human consciousness which seeks to mediate between the chaos of the outside world and the mechanical order of our inner subconscious. The external form stands as a landmark in the world of men. The interior space beckons to the human soul and provides an atmosphere of calm contemplation. 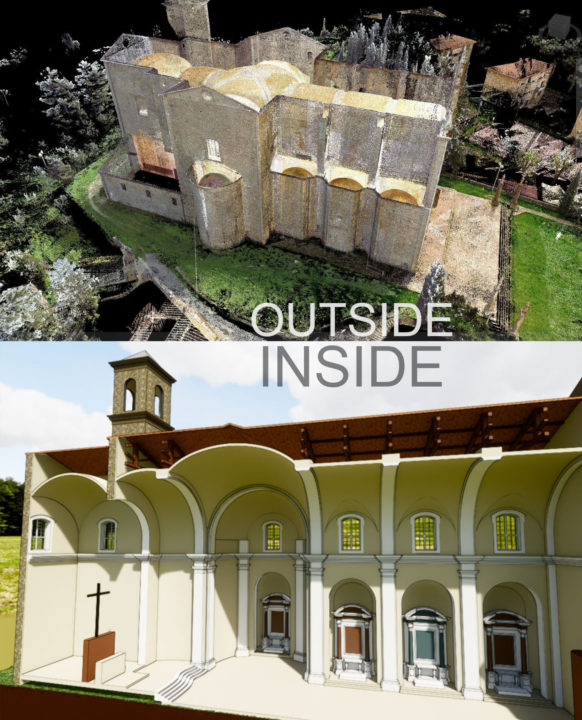 I grew up with a pencil in my hand, making sense of the world by converting it into visual diagrams. It was a way of interacting with ideas, striving to give them physical shape. These days I mostly use a “BIM pencil”. My diagrams are composed using software to create intelligent objects that mimic built elements: walls, doors, columns. But the goal remains the same. I am engaging with “reality”, trying to make sense of my experience, to capture embedded meaning.

So as soon as we had a useable registered dataset, I started to build a Revit model of the church of San Giusto. This was my way of striving to integrate new knowledge into my existing cognitive toolset. As I interacted with the work of seventeenth century builders I began to grapple with questions that popped into my head. Why are the high level windows down the sides of the nave blocked off? Was that part of the original design? Did they change their minds during the process of building, perhaps to save money? Or did they block the windows up many years later for some reason? What about the blank doors in the middle bay of the nave, on both sides? Similar questions arise. 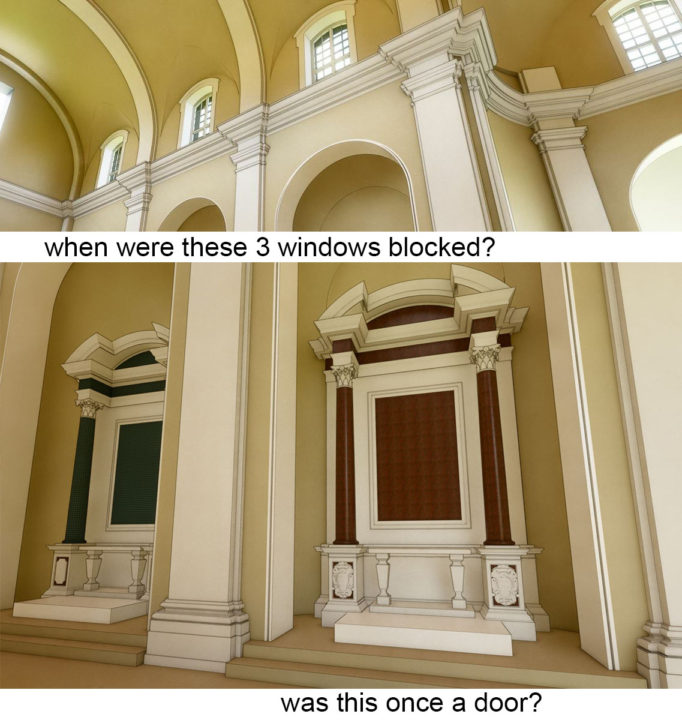 I spent several days working on this model, in between the other activities of the workshop. We were exposed to photogrammetry and to the use of drones to capture data from the air. We visited Etruscan tombs, a winery, interacted with local Archeologists, scanned a fascinating domestic interior. All too soon I was left with a single day to wander the streets my own and realise how poorly I understood the layout of the city.

So when I got home I started to make diagrams, models, visual representations. I had personal memories, point clouds, mesh data, photographs, google earth, wikipedia, GIS data, conversations with other participants. To process this bizarre collection and tease out some meaning I have been experimenting with different kinds of “pencil”

By coincidence, Autodesk released “Sketchbook” as a free download for all devices around this period. I have an Android phone with a stylus, an iPad and a Wacom tablet that connects to my Windows laptop. That gives me a complete spectrum between “precise-but-tethered” and “portable but low-res” It has also given my a route back into the world of drawing and painting that meant so much to me as a young man. 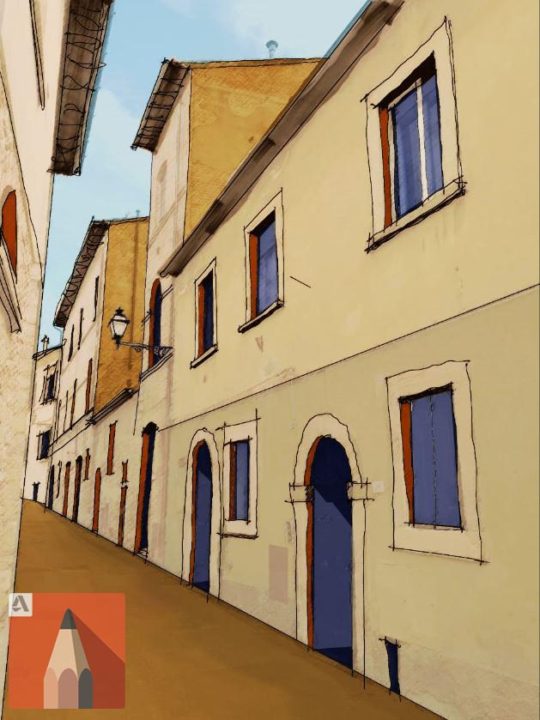 This first sketch was done using my Samsung phone. It’s loose and relaxed, capturing the informality of the back streets of Volterra. Hand-sketching is a process of looking more carefully than you otherwise might. For the first time I noticed the street lamps on their fancy scrolled brackets. They are everywhere in the photographs I took, but didn’t register on my consciousness until I started on this drawing. Composing a picture is always a mixture of accident and choice. You immerse yourself in the details of the process while remaining attentive to broader issues of balance, contrast, rhythm, texture. 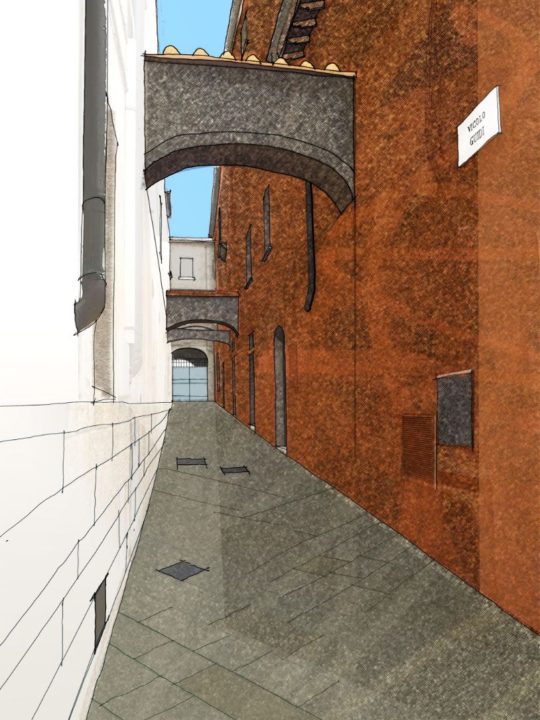 The next image is more controlled. The larger canvas offered by an iPad took me down a different rabbit hole, a highly abstracted study in textures. Once again I was attracted by the drama of the perspective. The alleys are often bridged by arches, sometimes with linking rooms above, but here apparently structural buttresses, resisting internal thrust. But why? You can see a couple of rainwater pipes here, normally copper, descending from half-round gutters. It seems to be normal practice for the downpipes to disappear inside the wall at ground floor. Is this to protect them from damage? Presumably they drop straight into an underground stormwater system.

As a schoolboy I was taught to be sensitve to where to stop. You don’t have to draw everything to the same level of detail. The diagonal paving joints are picked out here and there; metal covers and hatches selected strategically to convey the picturesque appeal of this very “lived-in” city. The colours are not “true to life” but neither are they randomly selected. The textures play with the tension between the flat surface of the picture plane and the implied perspective of a receding alley. 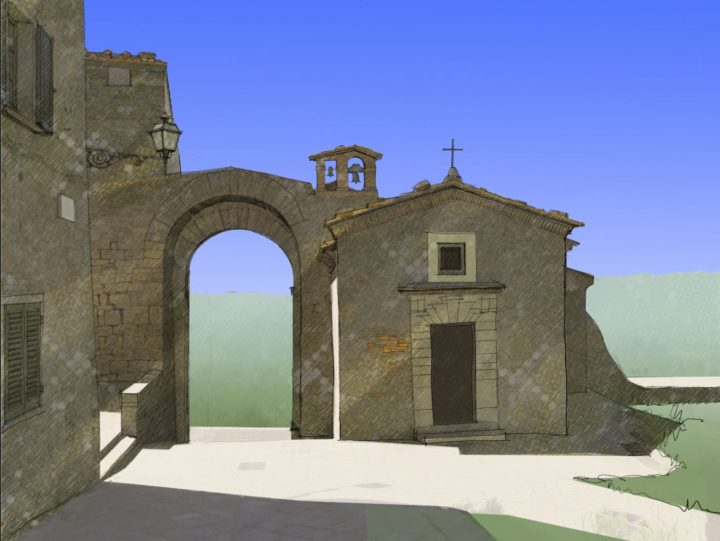 The third drawing utilises the precision of a Wacom touch-screen tablet. This brings me very close to the feel of pencil on paper. This is San Felice, a chapel and a minor gate. I tried to capture the feeling of a limitless horizon around the town: rolling arable farmland floating out in every direction. The illusion of reality is more intense, tricking the eye to see the intermingled textures of brick and stone, even though much of the wall surface is left blank and the ageing simulated by computer algorithms. The drama of sunlight streaming in from the left is a conscious attempt to mirror the concerns of a Dutch realist like Vermeer. I’m trying to put myself inside the mind of artists who lived in the Renaissance. Yes, it’s great to translate reality into data points: x,y,z coordinates and r,g,b colour values. But what about the feeling of a summer day? How do you convey the passage of time? 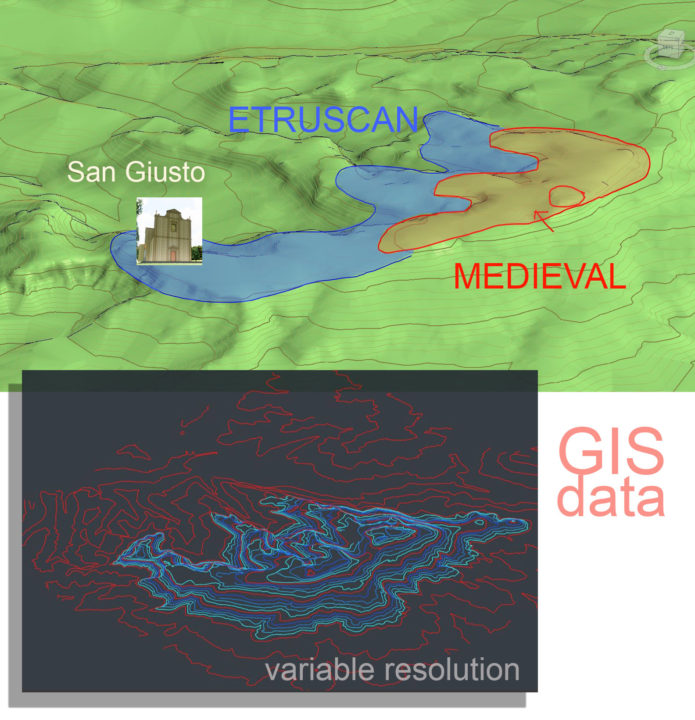 The church of San Giusto is built on a spur of land, one of three such spurs extending behind the ridge that defines the Medieval City. You can see this in a topographic surface that I created when I got home. This was constructed in Revit using GIS data. In a way it’s a very different process from hand sketching. But once again, while concentrating on the technical demands of the task, the other hemisphere of my brain is wondering “why am I doing this really? to what level of detail should I go?” And so I reduced the resolution of the contours as the distance from the city walls increased. 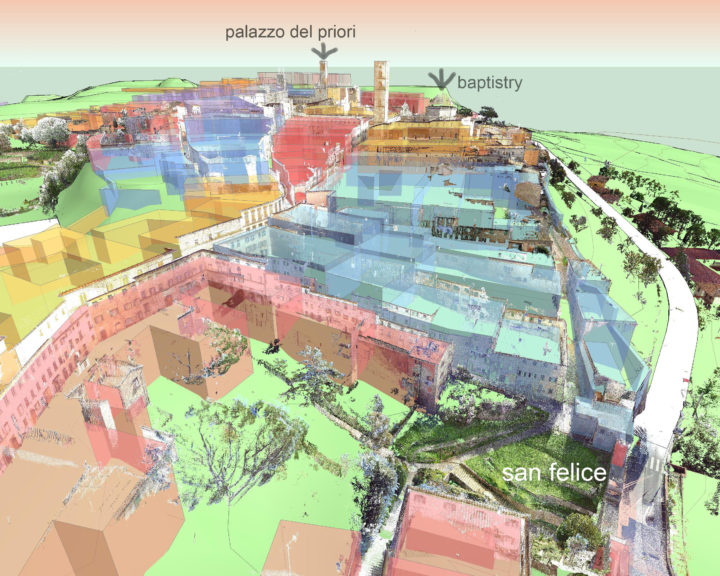 I embarked upon a massing model of the city. Initially I just wanted to create a diagram that would help me to locate my photographs. But as time went on I was drawn into the process of understanding how the buildings tumble across the contours. Ultimately I was able to link point cloud data back into the model to create an interactive hybrid. The colours in this diagram are somewhat arbitrary. I simply divided the city into “blocks” and coloured them alternately as an aid to navigation. Even on my last day in Volterra, I was wandering around somewhat blindly, taking photographs at random, whatever happend to catch my eye. But after some weeks of processing my memories in different ways I have a much clearer picture of the structure of the city. 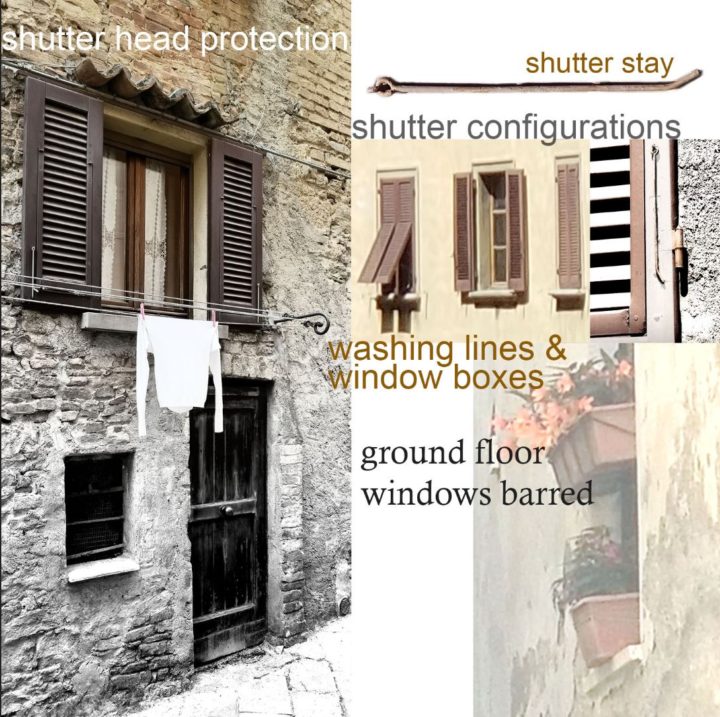 There are grand patrician palazzos striding down the main streets, and more humble apartments lining narrow alleyways, hanging their washing out of the windows, adjusting the versatile arrangements of shutters, watering the plants. Although the tourism is a major source of income now, the town remains very much a living organism. It’s not artificially frozen like a museum exhibit. There are multiple layers of meaning in the interaction between culture and technology. Which brings me back to my starting point. Style and substance, form and content, reality and illusion. Volterra is still buzzing with artists and craftsmen, traditions that stretch back for centuries.

What does Renaissance Italy mean to me, a citizen of Africa, born in England, living in the Middle East? You can trace the flow of ideas, from double-entry book-keeping, and perspective drawing through to the Bank of England and John Soane’s drawings, (two subject I have studied in some depth) You can talk about the wool trade between England and Florence, leading up to the birth pangs of the Industrial Revolution. But these abstractions only make sense to me as background thoughts to accompany hands-on studies, things I reflect upon while I am busy simplifying the city map into an abstract diagram for example.  It makes me wonder what the guy who designed the London underground map was thinking about as he struggled with his task. 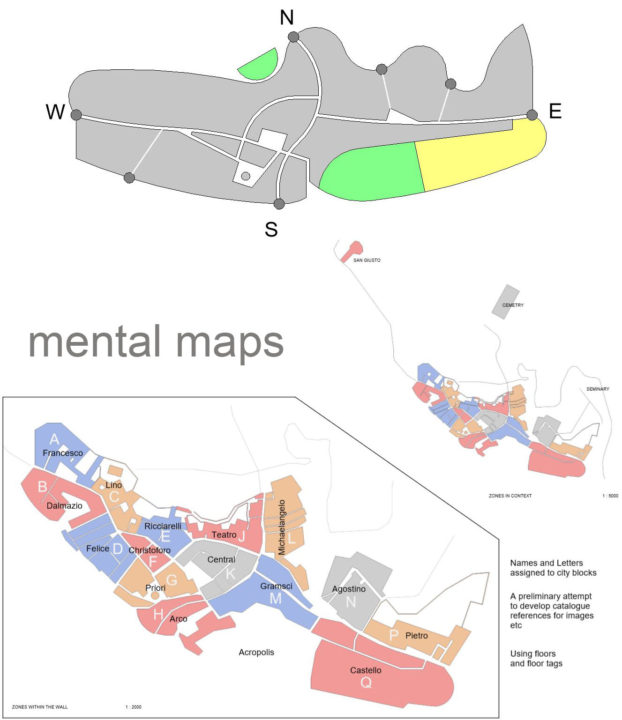 I have plied three trades in life. In my youth I worked with my hands in the building trades, from there I became a teacher and finally I settled on architecture. We face many challenges as we move deeper into our digital future. But ultimately all we can do is to hone our skills and reflect upon the questions that pop into our heads as we do so, striving to understand our history and remaining alert to the wisdom of experience.